Let us see what are the “ABC” in photography. They are nothing but the three basic parameters which every camera will have. They are Aperture, Shutter speed, and ISO, as shown in the figure. An image is formed as a result of these three parameters. These 3 parameters together make the Exposure triangle. Nowadays, most of the digital cameras/point and shoot cameras will give you access to control these three parameters. A Digital SLR camera would help you to gain a better control over these.

Actually, we can divide the camera into 3 parts based on these parameters. In front of the camera system, we have the Aperture. This is nothing but the lens part of the camera. After the lens, comes the shutter. This is followed by the Camera sensor, where we can control the ISO settings.

Aperture is the opening in the camera through which light enters. This comes in the lens part of the camera system. Size of the aperture determines the intensity of light entering the film or sensor. In other words, more light will enter the camera if the Aperture is bigger. The Aperture in a camera will be shown as f-numbers like f4.0, f5.6, f16, f22 etc. Smaller the f-number, bigger will be the camera opening. So, if you want a particular object in focus, with background blur then you need to select a smaller f-number from your DSLR camera. Higher f-numbers are good to bring more objects in the picture to focus, especially when you are shooting Landscapes.

For more information on Aperture:

What is Shutter Speed

Next parameter is Shutter speed. Similar to aperture opening, this parameter also controls the light entering into the camera. We can freeze the action with higher shutter speed. But at a higher shutter speed, less amount of light will be entering into the camera’s sensor. So, care must be taken to ensure that the image is properly exposed. The difference between shutter and aperture is that the aperture will be opened always whereas the shutter will be opened only for a predetermined time, as set by the photographer or the camera.

ISO indicates the sensitivity of the sensor or film in the camera. Higher the ISO value, greater will be the sensitivity of the camera sensor. So, you may think that you can set it to the highest available value in the camera. When ISO is increased beyond a particular value, you are basically increasing the noise level in the picture, which would become visible in the form of grains. Now the question may arise, why the camera manufacturer has provided higher ISO settings. Higher ISO is used mainly during low light conditions like night photography. Under low light conditions, we will have to go for a higher ISO value so that the object in the scene can be focussed properly as well as the shot is taken without any shake or blur. 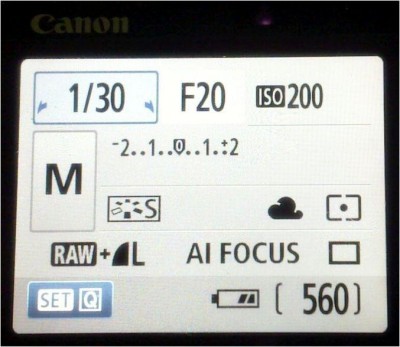 Manual Mode of a Canon EOS 500D camera is shown above. “1/30” indicates the Shutter speed set on the camera, “F20” indicates the Aperture value and the ISO value of 200 can be seen on the top row of controls. Once you have a good grip on these three parameters then you will be able to take really good pictures. Usually, a Digital SLR camera will have the following basic camera modes: Automatic, Manual, Aperture priority and Shutter priority modes.

In the case of Automatic mode, the camera will automatically select the Shutter speed, Aperture and ISO settings based on the scene. But, In the case of manual mode, you will have to set these three parameters. Most of the people will start with the fully Automatic mode, where they don’t have to think about anything, as the camera takes care of everything. This is a bad practice & you will never learn to use the camera in tricky lighting conditions since automatic modes hold good for only good lighting conditions.

“Practice makes a man perfect”, so take pictures regularly. This will definitely help you to improve your photography.