Corbett National Park situated near Ramganga river in Uttarakhand is named after the famous Jim Corbett, who played a major role in establishing this park. This national park is famous for its Elephants and Tigers. In this article, we will go through the different challenges and opportunities for a photographer to photograph the Elephants of Corbett.

Corbett is one of the best places in India to photograph Elephants in their natural habitat. There are many zones in Corbett National Park, and you can get permission to do jeep safari in a specific zone. Dhikala is the zone which you should choose, to photograph mind-blowing elephant frames.

In my opinion, you should carry two DSLR cameras. One camera with a wide-angle lens and other with a telephoto lens. You will have opportunities to capture both wide-angle frames as well as good elephant portrait shots. If you are carrying a single camera than make sure that you have a good zoom lens with you. 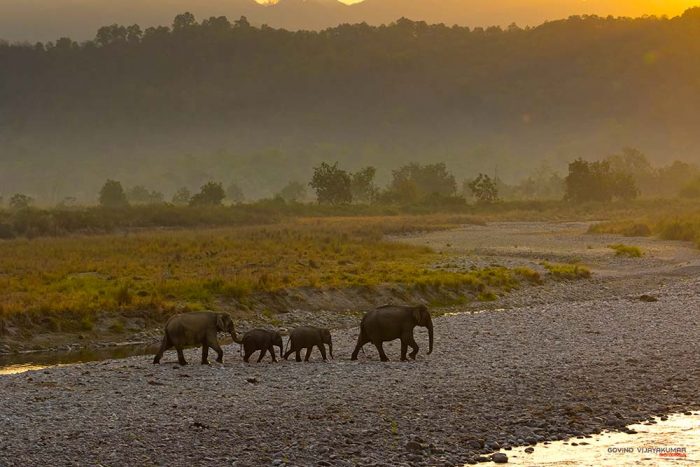 Morning jeep safari is an excellent opportunity to photograph elephants along with Sunrise. There is a place near the banks of Ramganga river where the elephants would come early morning for drinking water.

I made some excellent wide-angle frames using my Canon 70-200mm f/4 L IS lens. An extreme wide angle of 10-20mm can also be used to capture this scene. I just thought I would try something different at a slightly higher focal length and I was quite happy with my results. I had used bean bag for getting better stabilised shots. 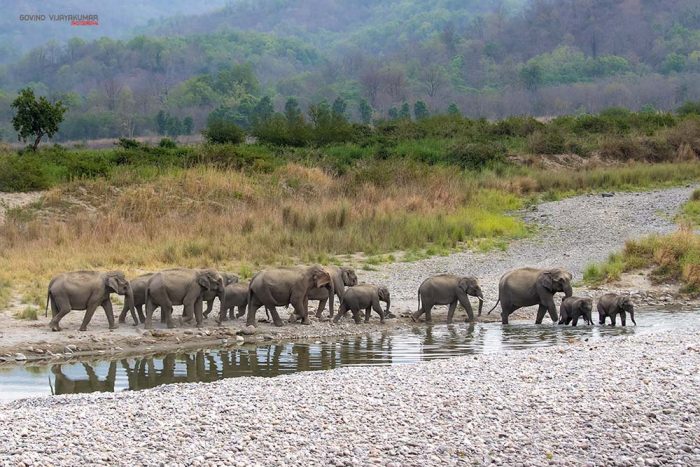 When the gang of little giants were passing along the banks of the Ramganga river, I saw the elephant reflections on the water surface since the water was almost like stagnant. So, this was an excellent opportunity to compose some image along with these beautiful reflections.

I had only very less time to compose and take the shot. It was because the moment the elephant gang crosses the river then the reflections will get distorted due to the disturbance in the water. But, I still managed to capture some frames using both the 70-200mm lens and the telephoto one. I made some photos with water ripples on the reflection also. 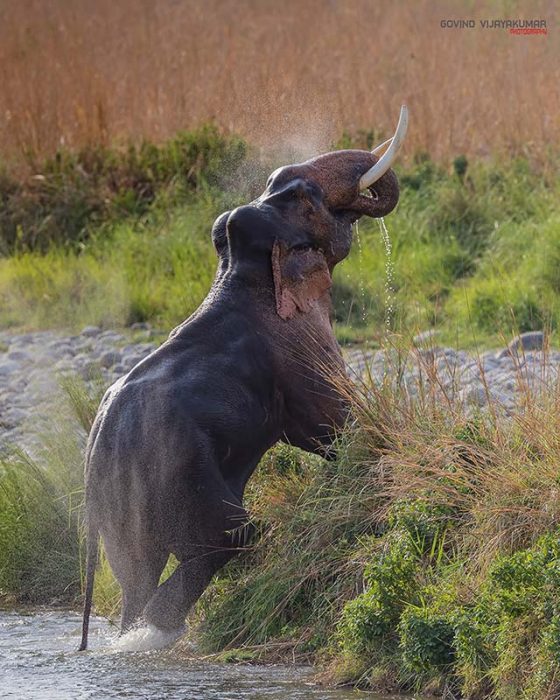 There is a big male Tusker at Dhikala, and this guy is not very much bothered by human presence. Mostly he will be seen alone and not with the herd. I was lucky enough to spot this elephant during the evening safari. This Tusker had come down to take a quick nap on the Ramganga river as it was scorching.

The moment he entered the lake, he had started to sprinkle water on his body with his long nose. It is similar to the usual Mud bath performed by elephants. The lighting conditions were very harsh, and it was quite challenging to get a good exposure on the elephant with the scorching Sun on the backside of the elephant.

The vehicle moved forward so that I could get a better angle for composition. I used my 500mm telephoto lens to capture a series of images of the elephant sprinkling the water on its body. Continuous Burst mode was used to achieve a series of images.

I selected the shutter speed in such a way that it is neither too fast to freeze the sprinkling water droplets nor too slow to create a silky-smooth effect. I can’t go for a slow shutter for the silky water effect since the elephant is in motion. If I do that I will end up in a blurry image. 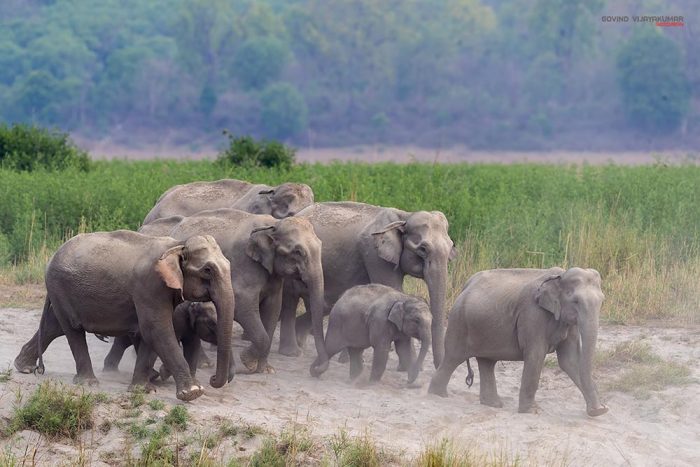 It was around 4’o clock in the evening, and elephant herd have started to come to the banks of Ramganga river to quench their thirst. They were running in the sands. It was an excellent opportunity to compose some interesting frames with the herds of elephants running. 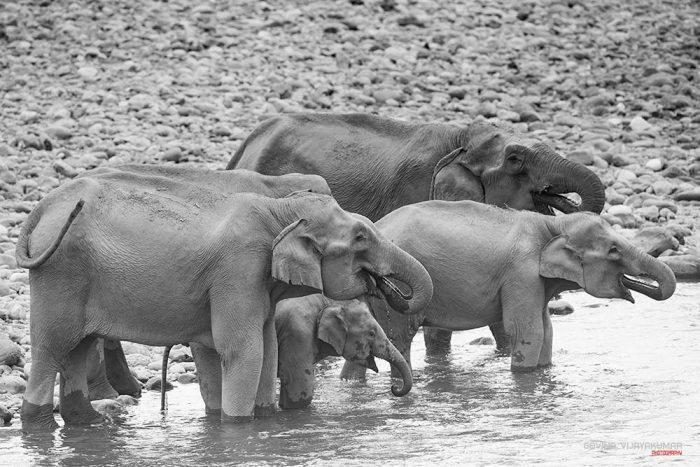 I rarely shoot in monochrome. The greyish elephants standing on top of ash-colored pebble rocks and

drinking water made me think to try Black and White Photography. I switched to monochrome in no time.

I was shooting in RAW format so I can still get a color image out of the RAW file while post-processing. But, the monochrome images came out pretty good, and I didn’t switch it to color during post-processing.

Elephants were crossing this river and coming to the other side of the river bank. After reaching the other side, their legs look like as though they are wearing black shoes. It is because of the water crossing. I captured some images with these funny black-footed elephants. 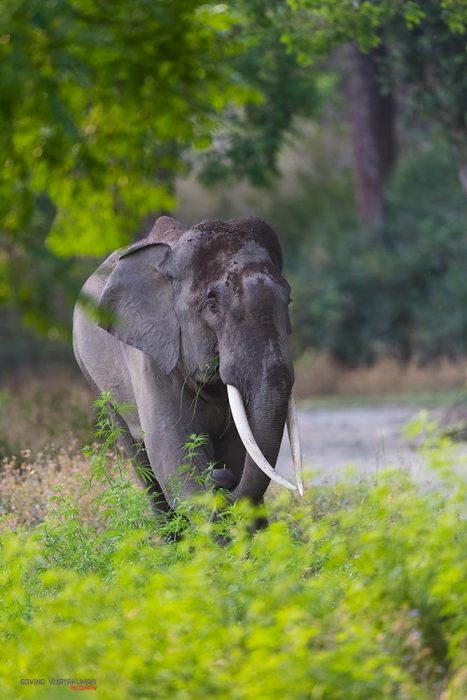 During one of the morning safari, we had to encounter a Tusker on our route. It was feeding on the grass in the safari route. So, we had to wait until it moves out.

I made some excellent elephant portraits with my telephoto glass. There were some green plant patches in front of the elephant. I made use of it to make the frame even more interesting. 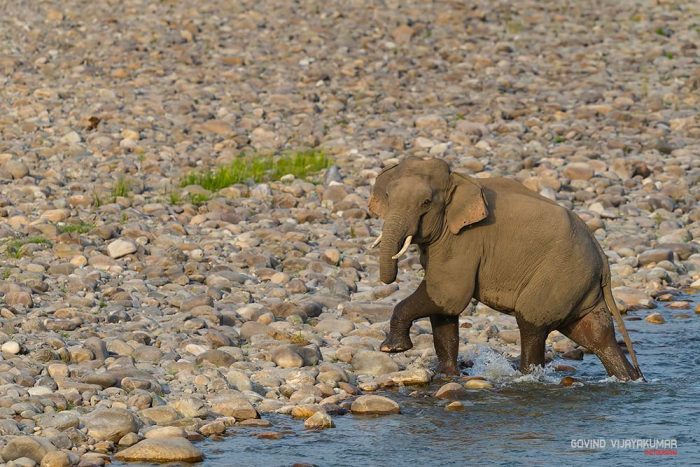 There is a regular path through which the elephant crosses after drinking water from the Ramganga river. I made some excellent frames when the elephants passed through this path.

Lush green forest patches on either side of a mud road track. The frame becomes complete when the elephant stands on the mud road. The lovely leading lines of the safari track made the image look interesting.

These are the different photo opportunities that a photographer can make use of when he visits Jim Corbett National Park. Always make sure that you take do elephant photography at a distance. Don’t try to get close to the wild elephants for your shots. Always keep a safe distance. Safety first, photography second. Keep that in mind.