I would be exploring Spiti Valley in Himachal Pradesh in India for photographing this elusive cat. Let us see,

What does it take to Photograph a Snow Leopard?

Winter is the best season to do Snow leopard photography in Spiti Valley (November to March). Rest of the time it will be living in still higher altitudes. So during the peak winter season, it climbs down from these places.  So you have the best chance of spotting the Grey Ghost of Himalayas during this time. They actually come down in search of food. During peak winter season their prey which includes Ibex and Blue sheep comes down. So, these Snow leopards follow the prey.

I had spent 7 days in Spiti Valley in search of this Grey Ghost during the winter season.  I was lucky enough to sight and photograph 4 Snow leopards- one male, one female and two cubs. The male one which I photographed was sitting on top of a kill.  The female one was spotted along with two cubs. 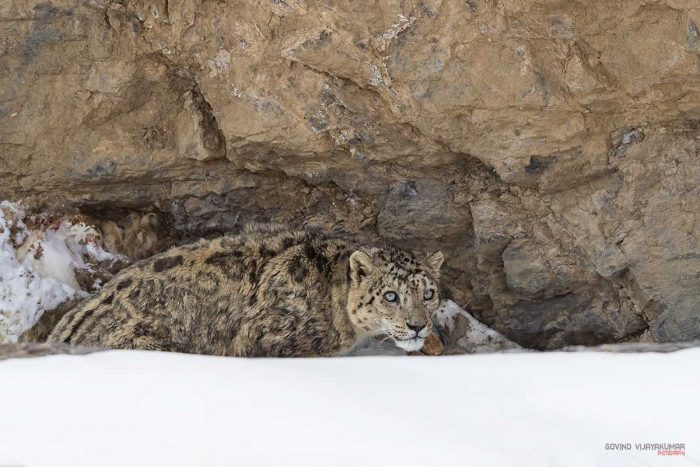 It is one of the toughest photography expedition which I have ever been to. Spiti is a cold desert mountain Valley in the Himalayas. Weather conditions are extreme over here.  Lack of oxygen is another issue since this place is devoid of any vegetation. So. I had faced breathlessness over here.

Walking 1 kilometre over here is equivalent to walking 10 km in plains.  So, you can imagine the amount of energy required to photograph a snow leopard in these locations.

The first day was spent for acclimatization.  The actual expedition started from the second day onwards. The trackers helped us to spot snow leopards. We couldn’t find a single one during the first three days.

Change of Luck with a Male Snow Leopard Sighting

Our luck changed on the 4th day. One of our spotters spotted a male snow leopard sitting on top of a kill. At that time, I was at a different location. This spot was around 1 kilometre away from this place. So I had to walk all the way to see my first sighting of this rare cat. Vehicles can’t go since the roads are fully covered with 2-foot snow.

I reached the destination huffing and puffing. I felt whether I was fit for a Snow Leopard photography expedition like this. The weather started playing in my minds too. I forgot all this when I saw the male sitting nicely on a gap between the base of two mountains. 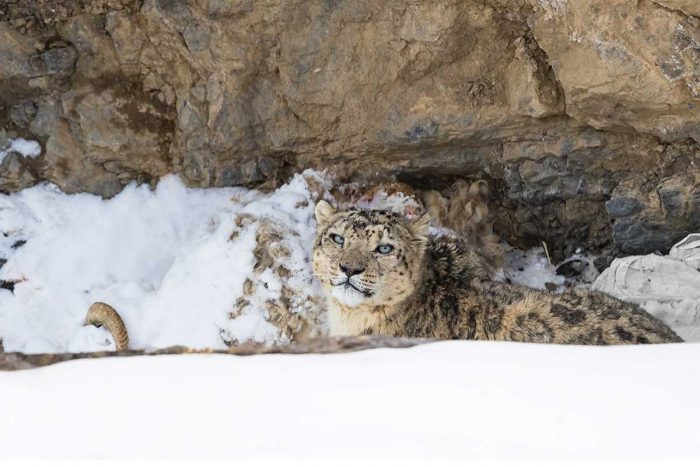 It was afternoon time. I had to wait for another 1 hour to get a clear view of its face. The lighting conditions were very tricky. There were lots of haze because of light reflecting from the snow.  The background of the snow leopard was mountains with Greyish brown colour. there is a good patch of white snow in front of the snow leopard.  So exposing this scene is a little tricky. If I expose for the snow, then the snow leopard will become dark, and if I expose for the leopard, I will burn the highlights in the snow.

So I need to adjust the exposure in such a way that I capture both details in highlights as well as shadows in the image. The RAW image would look like I have overexposed the snow and underexposed the snow leopard.

I corrected the exposure later during process processing. Shooting in RAW helped me to do that. I had to ensure that I can recover the slightly burnt highlights as well as the details in the Shadows. 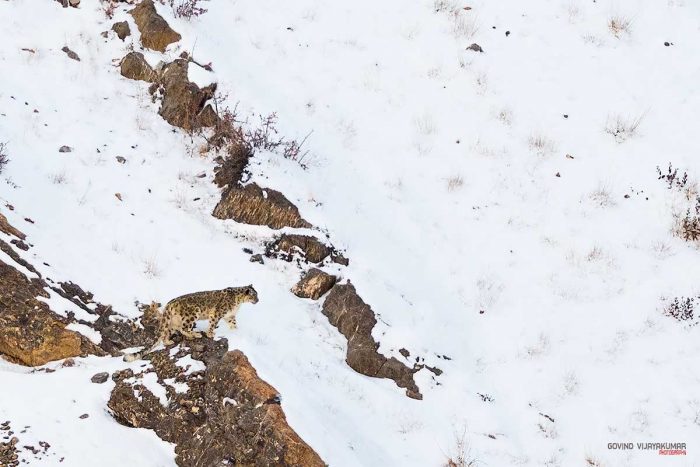 I photographed this scene with my Canon 1dx Mark II using Canon 500mm F4 IS II lens.  I made a few close up shots by connecting the Canon 1.4 X extender also. After some time, it became active and started to feed on the kill. Since it was moving around, I increased my shutter speed and set it to 1/1000. I had to bump up my ISO to 800 to match the exposure settings.

The time must be around 4 o’clock, and it was slowly getting dark.  I made a few more shots with slower shutter speed and with a 1600 ISO, as the light was getting low. There was no light after 5 pm, and it was becoming very cold.  So I had to pack and leave from that place. 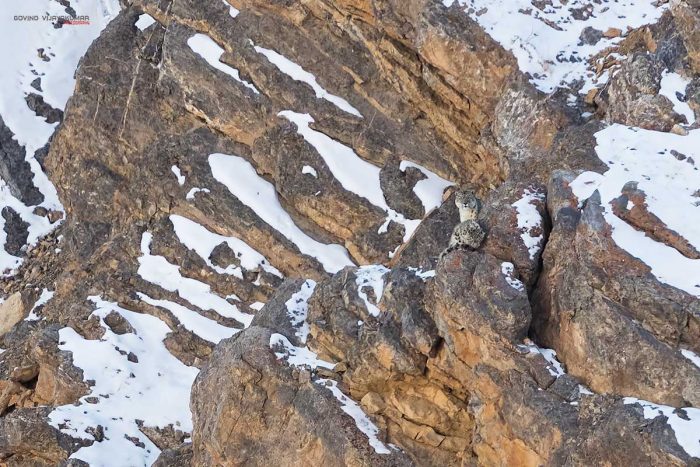 I made some Habitat shots since I didn’t have good reach. After some time a group of ibex was grazing on the other side of the mountain.  This was a chance for the mother to make a kill and feed the cubs. The mother walked slowly stalking the Ibexes. The Ibex Group got alert and moved away. So the mother had to give up the chase. The Snow leopard cubs were playing outside the den during this time. The light was going down and it had become very cold. We had to leave that place. It was my last sighting and I had to return the next day with some good memories.