When you photograph a subject which contains lots of small patterns like lines or similar shapes, then it can result in Moire patterns in the picture. They are visible in the form of unwanted wavy patterns in the image. It degrades the image quality, and the picture looks unpleasant.

It is an issue faced by portrait, fashion, product and architecture photographers. You can see it on the dress of models and people.

When you photograph a scene which contains a television (in ON state), then you can see the Moire patterns in the picture. It is because both the Television and the camera make use of scanning technology to capture the image. If you angle the camera at 30 degrees towards the television, then you can reduce the moire effect to an extent. You can also see this effect when you photograph computer monitors and laptops.

You can find two types of Moire effects in photos:

Line moire pattern occurs when there are straight or curvy lines in the scene, which are very adjacent to each other.

For example, when you photograph a piece of fabric with lots of adjacent thin parallel lines. You can see the unpleasant wavy effect on the photo of such a piece of cloth.

It occurs due to the similar repetitive shapes in the scene.

For example, if you try to take a picture of a piece of fabric with lots of similar dots or architecture with similar shape patterns, then this effect becomes visible.

What Causes Moire Pattern in Photography?

In photography, Moire occurs when the pattern which we are photographing exceeds camera sensor resolution. So, higher the camera resolution lesser will be the effect.

If you compare an APS-C DSLR camera and a Full Frame DSLR camera, the pattern effect would be more on the APSC because of lower image resolution, for the same scene.

How to Avoid Moire? 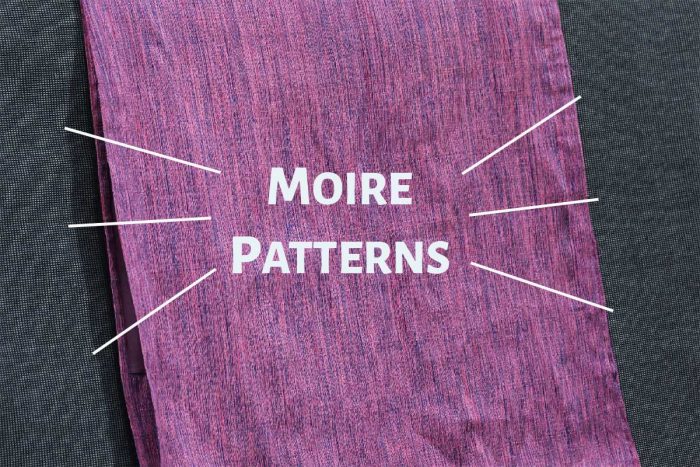 Now, we know, what is Moire and what causes it. Let us see the different ways to avoid this effect.

Take a test shot and Check

If you feel that there is a chance for Moire, then you can take a test shot to cross-check. It is always safe to check this at first itself.

Take a test shot of the scene, zoom in the image to 100% and view the areas in the scene where chances of such patterns are there. If you don’t zoom in to 100%, then you may miss it.

Nowadays, cameras are coming with a resolution of 20 and 30 megapixels. So, only a nasty Moire effect can be visible in the thumbnail view on the camera LCD for such high resolution.

Thus, you need to do a full zoom and check for proper detection. Only if you detect, you can rectify it at the time of the shoot.

Try Moving Away/ Zoom Out

Once it is detected then, If you are using a prime lens then you need to move away from your subject. Take another test image and check it to ensure that there are no Moire patterns in the picture.

Once you confirm that it is not there, then you can go ahead with your shoot with that camera settings.

It will help to match the pattern resolution with the camera resolution, thereby removing it.

As we know, for televisions and digital screens we can avoid Moire patterns by positioning our camera at an angle of 30 degrees.

So, we can try changing the photography angle for our subject to remove this effect. It may not be possible always as it alters the image composition. So, you will have to deal it with other techniques.

As a last resort, you can go for the in-built Anti-Aliasing Filter in your camera. If all other methods fail, you can make use of this method. Here the software blurs out the line between the repeating patterns, to avoid Moire patterns.

So, it will reduce the picture quality. The frequency separation technique does it for the line patterns passing through the lens to reach the camera sensor.

If you reduce the Aperture size, then you will have to lower the shutter speed and boost the ISO accordingly. It will impact your image composition. You will have to shoot at f numbers of f/13 and beyond. You are reducing the resolution by doing this.

How to Remove Moire?

Sometimes, we may miss the Moire effect during the photoshoot, when it is small. It would become visible when you sit in front of the computer for post-processing.

So, now the only way to fix it is while editing. You can use Adobe Lightroom or Photoshop to correct it to an extent. You cannot eradicate the patterns entirely while post-processing.

Most of the photographers will try to fix it during the photoshoot itself since it is a pain to remove it while editing.

So, I think, now you know, What Moire is all about, how to avoid it and remove it.