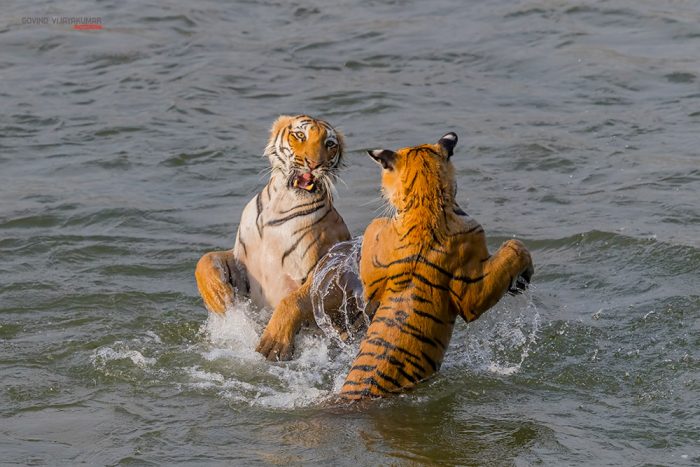 If you are looking for the best place to see and photograph wild Asiatic Elephants, then Corbett is the destination for you. It is also good for tiger photography.

Jim Corbett National Park is situated in the Nainital district of Uttarakhand, north of India.

The landscape of Corbett is a scenic one. Dawn and the Dusk are the best times for photography in Corbett. The Ramganga river, which flows through the Corbett, will be in shades of gold and orange during this time.

The Elephants and other wild animals will come to this river for drinking water, especially in the summer. The above image of the Elephant herd and the Tiger is from Jim Corbett National Park. It is also known as the “Land of Trumpets and Roar”.

The best time to visit Corbett is during Summer and Winter. So, October to May would be a good time for wildlife photography in this part of the world. 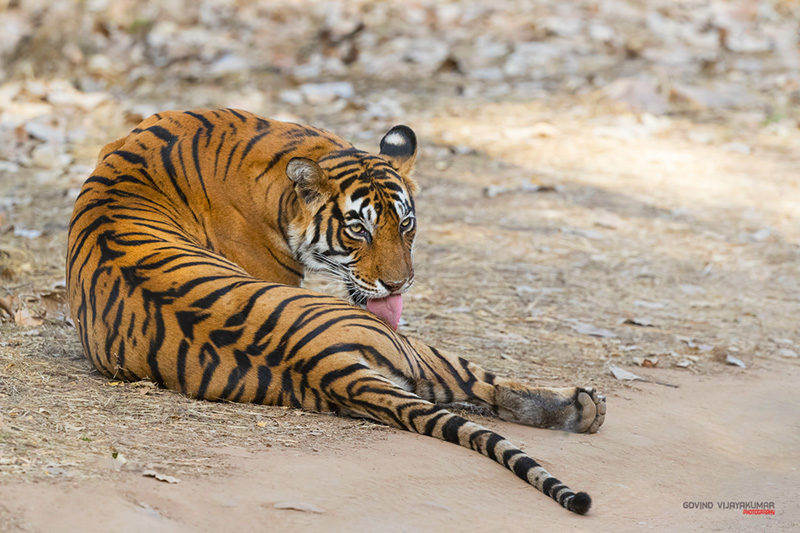 Your wildlife photography trip to India is incomplete without doing tiger photography. So, you must visit Ranthambore National Park for photographing wild Bengal Tigers.

Ranthambore National Park is in Sawai Madhopur district in the state of Rajasthan.

I have captured many beautiful images of Tigers and Tiger cubs from Ranthambore. It is one place where most of the Tigers are not camera shy. So, you can easily compose and frame your shots. You can also see Sambhar Deers, Sloth Bear, Leopards, and Spotted Dears.

The world’s most photographed Tiger “Machali” was from Ranthambore National Park. 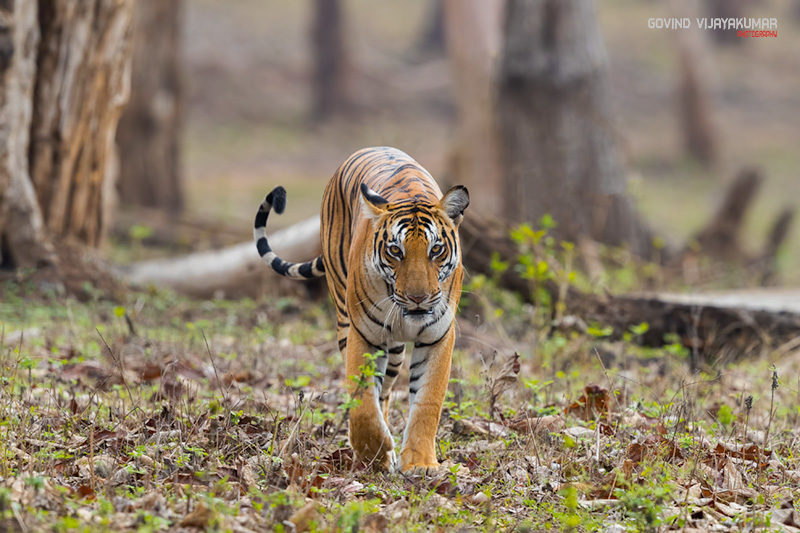 It is also known as the “Land of Leopards”. So, it is the best place to photograph Leopards in its Natural Habitat. It is also good for photographing other wildlife like Tigers, Indian Gaur, Elephants, Spotted Deer, and Gray Monkeys.

Nagarhole National park is one of the best wildlife photography spots in the south of India. It is also known as Rajiv Gandhi National park and is in Kodagu district in Karnataka state.

I had visited this national park many times and is one of my favorites. I have captured this image of a Leopard climbing down the tree with a deer kill from here. Many of my pictures of Leopard and Tiger are from this national park. My home is close to this park. This Tiger reserve is also famous for the Black Panther, which is not camera shy.

Summer and winter are the best seasons for sighting the Big cats in this park. So, you can plan your trip between March to May or October to February.

Tadoba Andhari Tiger reserve is another popular wildlife destination in India. It is one of the oldest national parks. A female Tigress, “Maya” is very popular in this park.

It is in the Chandrapur district in Maharashtra.

You can find lots of Bamboo thickets in these forests. So, the landscape here is quite different from other wildlife parks in India. You can also photograph other wildlife subjects like Indian Leopard, Sloth Bearn Dhole, and Indian Gaurs.

October to May would be the ideal time to visit this park if you are looking to capture good Tiger images. If you are lucky, then you may get an excellent opportunity to see the Tigress with her cubs.

Bandhavgarh is another popular destination for wildlife photographers.

It is known for Tigers. It has one of the highest Tiger population in the country.

There are three main zones in Bandhavgarh: Tala, Magadhi, and Khitauli. There was a Tiger called “Charger” which is the second most photographed Tiger, after Machli.

You can also photograph many other mammals like Barking deer, sambhar deer, Indian Leopard, and chital.

Bandhavgarh national park is in the Umaria district of Madhya Pradesh, central India.

Kibber Wildlife Sanctuary is in Spiti Valley in Himachal Pradesh, north of India.

You must carry an excellent super-telephoto lens to photograph Snow Leopard. It is because most of the sightings will be at a distance. So, you should have an excellent reach to get a good image.

The best time to visit Kibber Wildlife Sanctuary for Snow Leopard photography is between January and March.

The only place in the world where you can photograph wild Asiatic Lion is the Gir National park in Gujarat.

It is also known as Sasan Gir and is in Tala Gir in Gujarat.

Apart from Asiatic Lions, you can also have good chances to photograph Indian leopard, Nilgai, Chital, Sambhar Deer, and Indian grey mongoose. Most of the Lions will be resting under a tree. So, you can capture their interactions and facial expressions.

If there are Lion cubs, then you can photograph the interaction between the mother and cubs. If luck is in your favor, you can even photograph a Lion walking towards you. 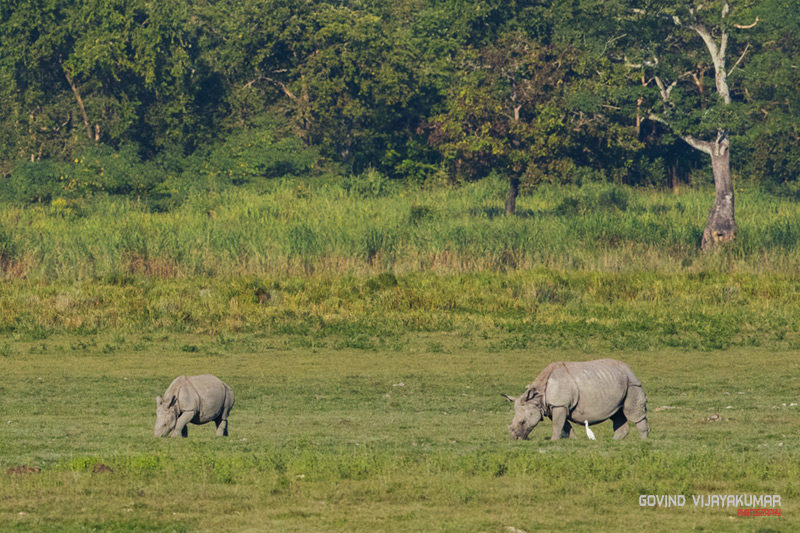 Kaziranga National Park is in the Golaghat and Nagaon districts of Assam, northeast of India.

You can capture beautiful landscape images with Rhinos using your wide-angle lens. The best time to capture these images is during Sunset. Don’t try to go very near to the Rhinos as they can charge at your vehicle.

The landscape of Kaziranga is entirely different from other National parks. It is full of long tall grass called “Elephant Grass”. So, you can capture some unique wildlife images from Kaziranga.

You can visit Kaziranga National Park between October and May. Avoid going there in the monsoon season as the park would be closed because of waterlogging.

If you are planning a visit to Nagarhole National Park, then you can combine Bandipur along with it. Bandipur also has a good population of Tigers. This park was earlier famous for its male Tiger called as the “Prince”.

Bandipur National Park is located in the Mysore district of Karnataka, south of India.

October to May is an excellent time to photograph wildlife at Bandipur national park.

Along with the Tiger, another interesting animal to photograph from Kanha is Barasingha. Indian Gaur, Dhole, Wild Boar, and barking deer are some of the other animal species.

Kanha National park is in the Mandla district of Madhya Pradesh, central India.

You might have already seen the character “Mowgli” in Jungle book. Rudyard Kipling created this character from his inspiration on Pench Forest.

Pench national park is in the Seoni and Chhindwara districts of Madhya Pradesh, central India.

The best time to visit Pench is between November and May, which covers the winter and summer season. So, you must visit this dream forest land of Mowgli.

Sundarbans national park is entirely different from the rest of the parks. Here, you will have to do the boat safari to photograph royal Bengal Tigers. It is a mangrove forest on the Ganges Delta. So, the habitat is completely different.

You can also photograph saltwater crocodiles, Leopard cats, Jungle cats, and macaques. Tiger in mangroves is an exciting frame to capture. You won’t be able to capture such a frame anywhere else on the planet.

October to March is the best time to see and photograph Tiger in this national park.

So, if you are planning to do a wildlife photography trip across India, then I recommend you to cover these 12 national parks. You will get the best lifetime experience with wildlife. Don’t forget to take your good telephoto lenses when you are visiting these places. Wildlife sighting is all about luck. So, take all your luck with you when you come to these places.

When you visit these parks, don’t go for the tight headshot of animals alone. Try to capture them along with their habitat to give a better feel to the image.