In my childhood days, I was a big fan of Jungle book. I used to watch it regularly whenever it was shown on television. Those who had watched Jungle Book would be familiar with the name “Kichi.” For those who are not familiar with this character, it is none other than the cute Red Panda who hangs out with Mowgli in the Jungle.

The name “Panda” will be a familiar word if you have watched the movie series Kungfu Panda. These are Giant Pandas, which are from the Bear family, and they would be in black and white color. But the Red Panda is from a different family called the ailuridae, which is a subfamily of Mustelidae. Earlier, they were classified in Procyonidae (raccoons) and Ursidae (bears). 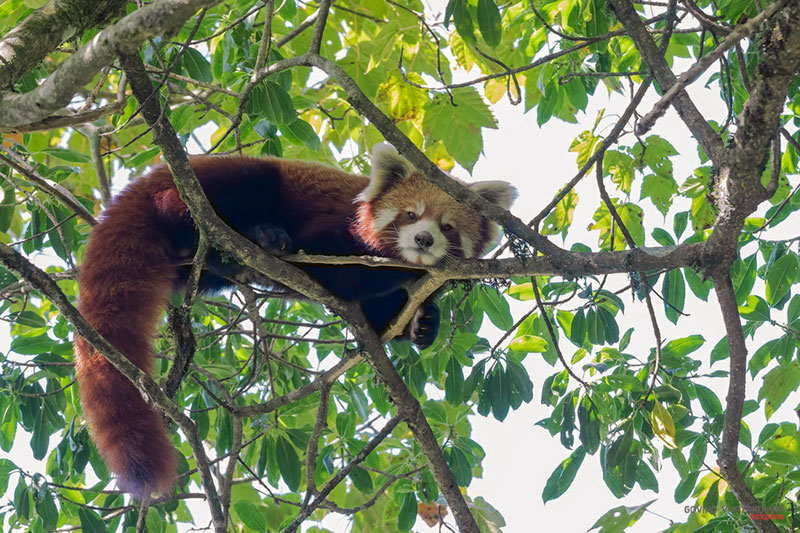 There are two subspecies of Red Panda. The species found in Nepal, Bhutan, north-east India, and some parts of China are known by the scientific name Ailurus fulgens fulgens. The other subspecies are recognized by the name Ailurus fulgens styani, which are found in Hengduan Mountains in Sichuan and Yunnan Province (China). In Northern Myanmar, the second subspecies is slightly bigger than the other one.

Apart from India and Nepal, China and Bhutan are the other two countries where one can find Red Pandas. They live in the foothills of Himalayas and can be located at an altitude ranging from 4900ft to 13000 ft in the temperate forest. Their size is similar to that of a domestic cat, and they feed on bamboo shoots and leaves mainly.

In Nepal, they are known by the local Nepali name “Nigalya ponya,” meaning Bamboo eater. They are generally solitary creatures. Like a tiger, each individual has got its territory, and the area of a male Red panda will overlap with that of a female Red Panda. 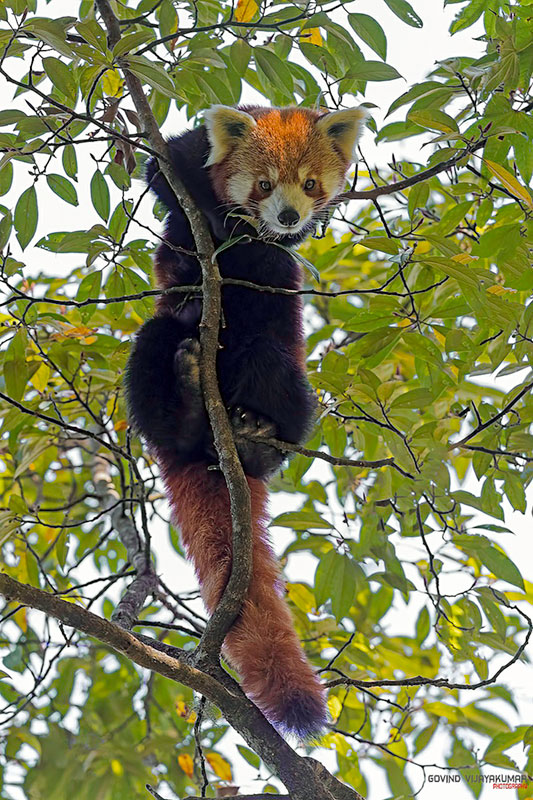 Male has a territory of twice that of a female. They also mark their territory with urine and scent from the gland from their feet. Their life span is around 10-15 years. It takes 12 months for a baby panda to become the adult size, and they reach sexual maturity at 18 months.

The rapid decline in their population is attributed to habitat loss, which is a result of human development and also because of their slow reproduction. After a gestation period of 4 months, the mother gives birth to only one or two cubs. Also, because of their slowness in the movement, they become easy prey to predators and poachers.

So, a trip was planned to search for the rare and elusive Red Panda in the wild, along with a couple of my friends. We have arranged a guide over there to look for this beautiful mammal. His name was Tenzin.

We have boarded our flight from Bangalore to Bagdogra. Tenzin would be waiting for us at the airport. After meeting Tenzin at the airport, we started our journey. Our first destination was Manebhanjang, where we would be staying overnight. We started our trip to Singalila National park next day morning to search for the elusive Red Panda. 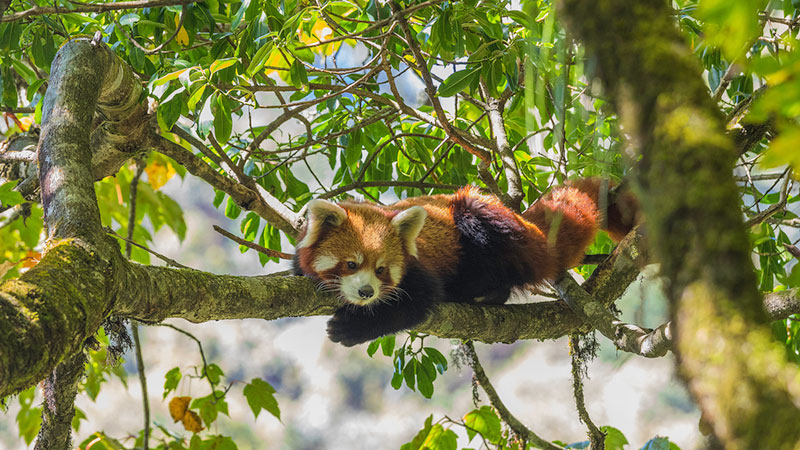 Since it is a hilly region and the roads are in bad shape, we used safari Land rovers for our journey up the hill. Our first stop point was Tumling. On the way to Tumling, there were lots of bird activities. We had our breakfast at Tumling. Tenzin suggested us to walk towards the next destination since the chances of spotting the Panda is more if we walk rather than sitting in the jeep.

Next Destination was Garibas, where we will be staying overnight. Our trek started with the sighting of the spotted nutcracker, which was followed by the beautiful Darjeeling woodpecker. After another half an hour, we were lucky enough to get a glimpse of male and female Satyr Tragopan.

But my mind was still hovering around the thought, whether we will be able to see the Red Panda? We reached Garibas around 12 o clock, but still no luck with the Red Panda. On the way, our guide was showing the places where he had spotted it earlier.

We started trekking again after a short break of half an hour after lunch. But, still, no luck, and we had to return in another 3 hours because of the fog. It reduced the visibility inside the forest. I had a good sleep that night because of the tiresome trekking. We walked for around 12 km the whole day.

We have decided to dedicate the next day fully for Red Panda in a different route. If still unsuccessful, we will move to Nepal, where the chances of spotting this beautiful mammal are more with the help of NGO volunteers who protect the critically endangered Red Pandas. 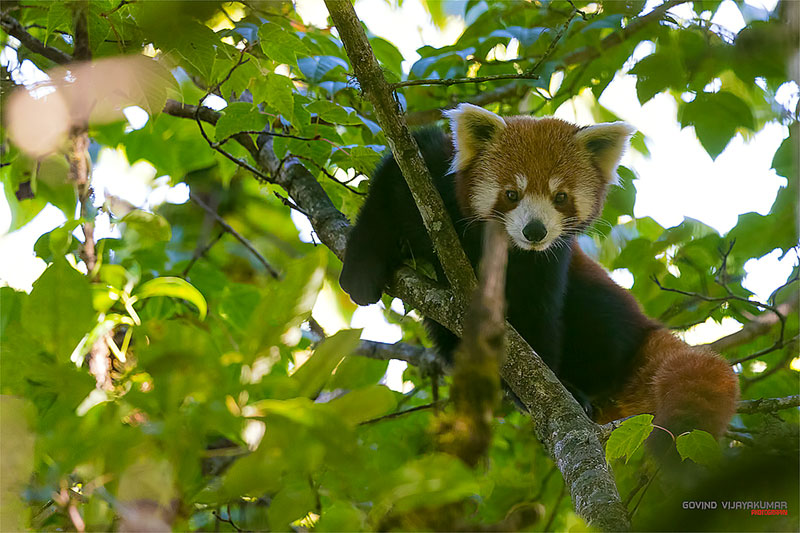 We started our morning trek after an early breakfast. I saw many beautiful Himalayan bird species on the way, which include the beautiful parrotbills, and the fire tailed Myzornis. We only took a break in the afternoon for an hour for lunch in between. All efforts were put to sight this beautiful mammal.

In the end, we were only lucky to find some fresh scats of this species, which was identified by our guide. The light was about to go, and we started back to our lodging place. It was one of the tiresome trek covering around 25km the whole day in the mountains where there were hardly any proper trek routes. In the night, we have decided to end our efforts to search the Panda in India and travel to Nepal the next day.

So, the next day, we started our journey towards Nepal after having tea in the morning. We stopped in between for breakfast in a restaurant on the Indian side. From now onwards, we will travel in another vehicle with another driver.

While we were about to finish our lunch, our old driver came back to us and informed us that he saw a Red Panda crossing the road while he was driving. One can see all the excitement in his face.

He has asked us to start immediately to this point, and this location is within the Indian territory. I didn’t have any hope since it has already made the crossing. But, my guide informed me that if the Panda had climbed any tree in the forest, then it will be in that tree for an hour or two. This information was entirely new to me. So, my excitement also grew. 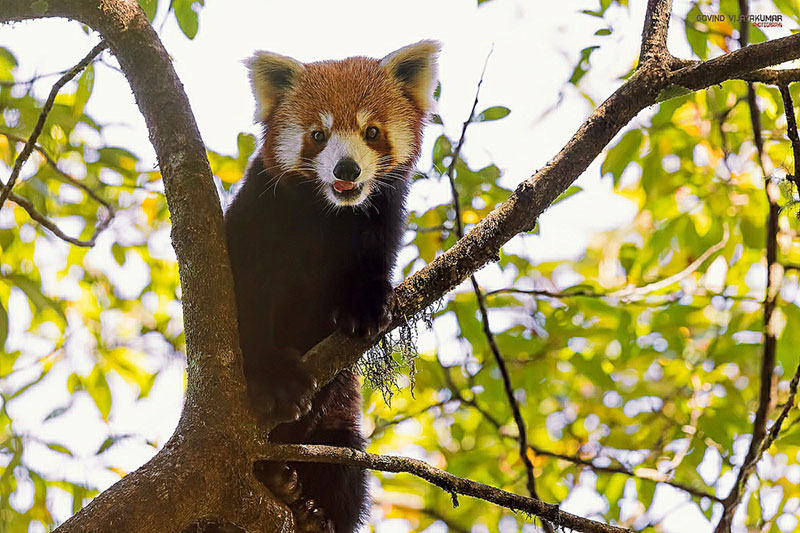 We started in our old safari vehicle, and our driver stopped in that spot and started the search along with the guide. For my luck, the Panda has settled in one of the trees, and my wish of photographing this elusive mammal in the wild from India finally came true.

I don’t know what to tell in at that moment. Even though lighting conditions were not favorable for photography, I managed to click some images.

The harsh daylight was there all the time behind the red panda which was giving nice pose from the tree. Many thanks to the impressive dynamic range of my Canon 1DX Mark II camera, I was able to capture some beautiful images with lovely details.

Finally, I have decided to leave that place without disturbing this cute little one, once the Panda has decided to take a nap in the tree.

We continued our journey to Nepal and reached a small village in Nepal by the afternoon for lunch. We will be staying here for the next couple of days to try and photograph a Red Panda from the Nepal side too.

In the evening, we trekked in the nearby forest area, looking for birds and the Red Panda. We were able to see some beautiful birds, but no Panda.

The next day, a couple of volunteers from the Red Panda NGO group joined us. They know the regular spots where this beautiful mammal is sighted. So, we started the trek searching in these places. No luck till afternoon, and we had our lunch on the way.

Suddenly, one of the volunteers came to us all the way running and asked us to follow him. There was no path. It is a steep path down the mountains inside a dense forest.

After moving around 800 meters down, I saw the Red Panda moving slowly on a treetop. Thus, I was lucky to photograph one on the Nepal side too. This red panda was slowly moving between the trees.

I spend around 10-15 minutes with this individual before we decide to leave the spot without disturbing him. We reached back our camp early and spent some time relaxing, browsing through some of the beautiful panda images.