It is also called the Forest Eagle Owl. In Sri Lanka, it is locally known as “Ulema,” the devil bird. Its call is similar to that of a human cry.

I got this sighting from Marayoor town of Idukki district in Kerala.

The main challenge of photographing the Spot-Bellied Eagle Owl was the lighting. The three-month-old baby owl comes out of the nest during late evening and early morning. It was nesting on a tall dead tree, which has a hollow opening on the top. Luckily, there is a building on the opposite. So, I climbed on top of this building for photographing this Owl. 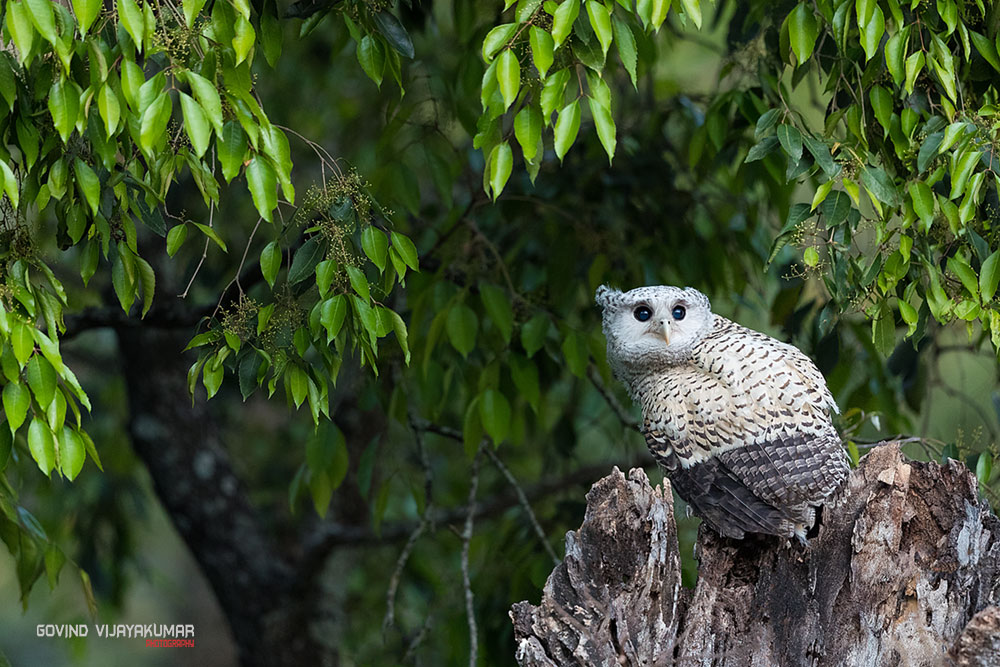 My first sighting happened late evening. So, I had to bump my ISO levels to get a good shot. Initially, I tried getting a closeup shot using my Canon 7D Mark II camera with Canon 500mm f4 L IS II lens. But, the image became noisy since I had to go up to 2000 ISO.

So, I switched to Canon 1DX Mark ii full-frame camera body to leverage its noise performance. Slowly, the lighting started to deteriorate, and the ISO reached 6400. I can still remove this noise using software like Topaz Denoise AI.

Soon, the Spot-bellied Eagle Owl chick started making calls, looks like it is hungry, and the mother is somewhere nearby. After a few minutes, when the natural light has gone completely, the mother came and sat on the nearby tree.

My camera ISO reached 25600, and I was getting a three-stop underexposed image with a shutter speed of 1/30. So, there is no point in doing photography anymore. So, I packed up my camera gear.

I have decided to try my luck on the next day early morning too. 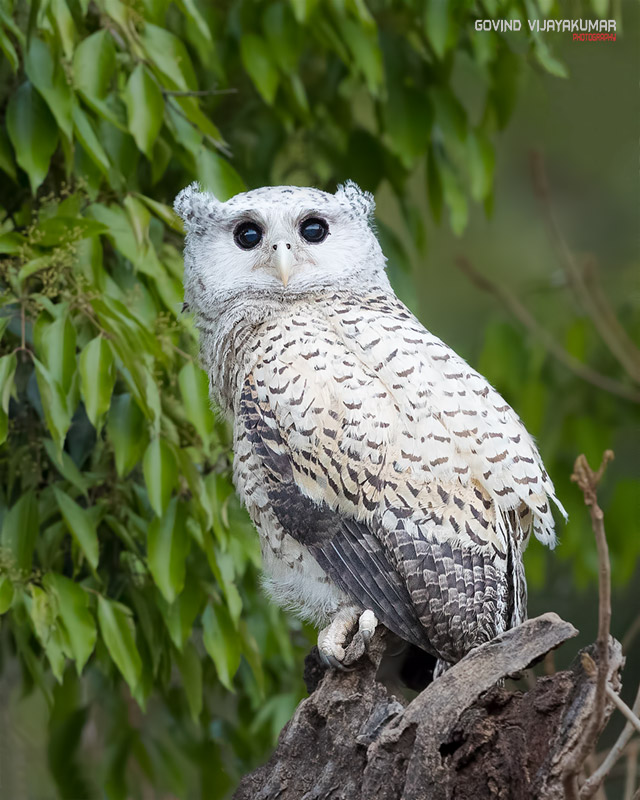 I got up at 5’o clock early morning and waited on top of this building. The owl chick was there on the top of the dead tree. But, the light has not come yet. So, I decided to wait. During this time, the mother owl came with a kill (looked like a squirrel) and started feeding the chick.

The mother left the place before the light came. The baby owl went inside the tree hole, once its tummy was full. In another hour, the chick became active and started climbing to the top of the tree. Lighting conditions were getting better, and I managed to capture some good images at 800 and 400 ISO. The chick started to hop around the top of the tree, looks like it is learning to fly. 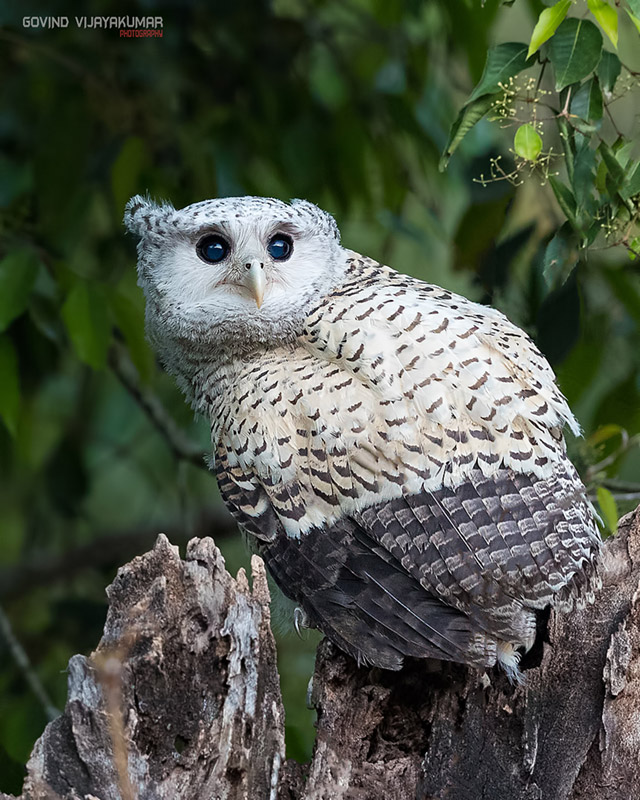 So, I got some excellent bird portraits. I photographed from multiple angles to get different backgrounds. I used the rule of thirds and fill the frame techniques to compose my images. The owl went inside the tree again after half an hour of acrobatics. Now, it will go to sleep. So, there is no point in waiting, and it is good not to disturb it.

Suddenly, I heard the call of adult Spot-bellied Eagle Owl. It was the mother. It came and sat in another tree, next to this dead tree. I managed to capture some good images and preening videos of the mother owl too.

After some time, the mother owl went to sleep, and I climbed down the building. To my surprise, there was another Spot-Bellied Eagle Owl on the opposite side. This one looks like the father owl. But, there were lots of leaves clutters in the foreground. So, there is no point in taking pictures.

One Last Time with the Spot-Bellied Eagle Owl

Now, the only other opportunity is during the late evening. As a photographer, I want to spend more time with the owl to improve my shots. So, I have decided to give one more try.

This time, the owl chick came outside the tree hole little early. So, it was an excellent opportunity to frame some more images with the owl in action. The lighting was good during the dusk time. I captured some magnificent pictures of the Spot-Bellied Eagle Owl in various poses. But, there was no sight of the mother and the father. Finally, I have decided to pack up my camera gear and leave the place.